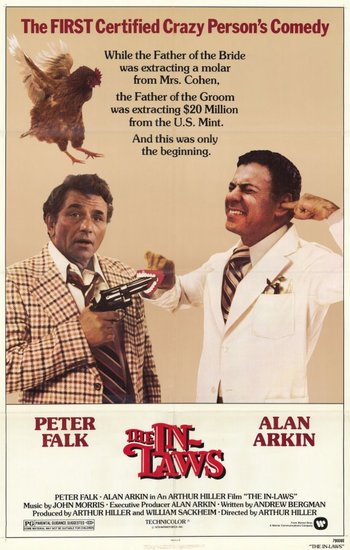 "This man's wonderful daughter is marrying my son the day after tomorrow!"
— Vince Ricardo
Advertisement:

The In-Laws is a 1979 comedy film directed by Arthur Hiller, written by Andrew Bergman, and starring Alan Arkin and Peter Falk.

Sheldon Kornpett (Arkin) is a successful dentist whose daughter Barbara (Penny Peyser), a psychology student, is marrying Tommy Ricardo (Michael Lembeck), a law student, this upcoming weekend. Everyone approves of the wedding and is excited, but Sheldon's a bit nervous because he still hasn't met Tommy's father Vince (Falk), who apparently does "international consulting work".

When Vince does make it to dinner one night, he immediately turns Sheldon off with his tales of seeing tsetse flies carrying children off in Guatemala, and by the way he treats Tommy when Tommy makes a joke about the long-distance phone calls he makes. Sheldon wants to call off the wedding, but Barbara and Sheldon's wife Carol (Nancy Dussault) talk him out of it, and convince Sheldon to be nicer to Vince. So the next morning, when Vince comes to Sheldon's office asking for a favor, Sheldon says yes. Turns out Vince is really working for the CIA, and he's stolen some currency engraving plates, which he plans to sell to a corrupt Latin American dictator named General Garcia (Richard Libertini) in order to nail him in a sting operation. Pretty soon, Sheldon is wishing he never decided to help Vince in the first place, and Hilarity Ensues.

This film was not well-received by critics when it first came out, but it did well at the box office and has since been rightly regarded as one of the best comedies of the last few decades; Premiere magazine put it on its list of the 50 best comedies of all time. It was remade in 2003 with Albert Brooks in the Arkin role and Michael Douglas in the Falk role, but it wasn't well-received by critics or the box office.