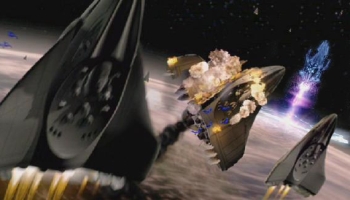 "We always thought Earth would be our home. But we were wrong. And we had to leave."
"Mankind was born on Earth. It was never meant to die here."
— Tagline for Interstellar
Advertisement:

Earth (or another species' homeworld) has fallen victim to some disaster and is no longer inhabitable. But fear not, we managed to get some people off before it was too late. The actual means of escape will usually be some form of The Ark. A common variant is one where Earth has become inherently hostile to a Humanity that lacks interstellar travel, resulting in the creation of a Die or Fly Colonized Solar System.

making the Earth unavailable helps to justify why humans have spread through the planets and/or stars, and it sets up a situation conducive to the evolution of a wide variety of odd new cultures.

Even though the Space Age had begun over half a century ago, it's clear that humanity is not going to leap off this rock we call home and emigrate into space in large numbers without a good reason any time soon. Science fiction fans are used to the idea that we're going to spread out and colonize the solar system, but space travel is just too expensive for that, at least with our current technology. So if the creator of a science fictional universe wants a civilization in which most people live in space, the easiest way to justify its existence is to take Earth out of the picture.

Losing the Earth also allows the imagining of unprecedented cultural variety. After such a disaster, the remaining humans become refugees and have to endure deprivation, isolation, and radically new environments and challenges to survival. With the Earth gone, there is no several-gig person "anchor" to hold back cultural changes, and this allows the evolution of strange new civilizations.

Always results in a case of Earth That Was, though in some cases of that trope the space colonies existed before the disaster. For when the survivors already happened to be in space for unrelated reasons, see But What About the Astronauts?. Compare and contrast Planet Spaceship, which includes cases of people fleeing a threat along with their planet.