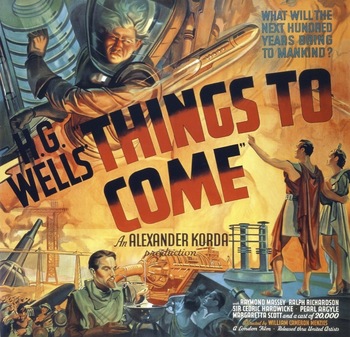 Things to Come is a 1936 British Science Fiction film based upon the novel The Shape of Things to Come by H. G. Wells. Directed by William Cameron Menzies and adapted for the screen by Wells himself, the film follows a concept and plot similar to the book, and is seen mostly through the eyes of the cynical-but-visionary John Cabal (Raymond Massey) or one of his descendants (also Raymond Massey) and centered on a fictional English city called "Everytown".

The film is divided into three distinct segments of history (similar to the novel's division into discrete sections). The first, set in 1940 Everytown, juxtaposes the looming threat of war with a peaceful Christmas celebration, contrasting a bleak outlook with optimism for the future. And then the military is mobilized in response to an enemy incursion, and Everytown is devastated by bombers; the Second Great War has begun.

The war drags on for decades, plunging human society into a Mad Max-style After the End state and unleashing a deadly, contagious and incurable plague. When next we catch up with the residents of Everytown, in the then far-flung year 1970, it has become a shanty, all but overrun by plague-ridden citizens and ruled by a Small-Town Tyrant called "The Chief" who has taken an extremist method for dealing with said plague-ridden citizens — in stark contrast to a young doctor who, despite the now primitive conditions, is striving for a cure. Into this arrives a stranger: John Cabal himself, who reveals that human society has not been completely wiped out and is in the process of rebuilding itself. The Chief, however, is interested only in holding onto his own niche of power, and so Cabal must call down his military allies on the town.

Another montage carries us farther into the future, showing mankind rebuilding society into a shiny plastic underground city. Now, in 2036, John Cabal's equally visionary great-grandson Oswald is spearheading mankind's first expedition to the Moon. However, a radical dissident opposes the expedition on the basis that human technology and knowledge are advancing too fast (or something to that effect). The dissident's plot to stop the launch fails, and Cabal waxes on about mankind's eternal quest for knowledge. The End.

Wells had intended the film to be a response to Fritz Lang's Metropolis, and he hoped to do everything he felt Lang had gotten wrong in envisioning the future. To that extent, the whole thing can basically be viewed as an extended Author Tract, with characters who are little more than two-dimensional ciphers who don't do anything but talk earnestly about how self-destructive and brutal the world is and how great the world would be if only it were governed rationally along socialist/modernist lines. Because, y'know, progress! Unfortunately for Wells, the movie bombed, and a lot of the ideas that informed his vision turned out to have severe defects that make the movie look really dated, and not just for aesthetic and historical reasons. But on the other hand, there's tons of Scenery Porn and the cinematography is pretty well done. It's also impossible to overstate how influential the movie was. Its ideas and general feel influenced Science Fiction writers well into the '70s. For example, Gene Roddenberry's Star Trek and Isaac Asimov's Foundation are more or less expanded versions of Wells' future.