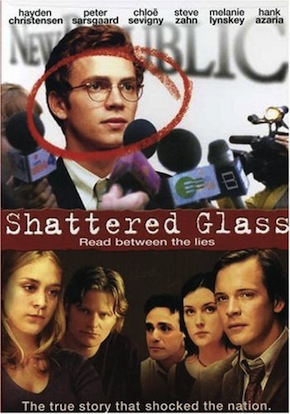 Shattered Glass is a 2003 film written and directed by Billy Ray.

It's about the rise and fall of Stephen Glass, a writer at The New Republic magazine who spent years making up fictitious stories for the magazine before he was finally exposed. Hayden Christensen stars as Glass, and Peter Sarsgaard stars as Glass's last editor, Charles Lane.

Not to be confused with Transformers: Shattered Glass. For those who are curious, the article that the movie was based on can be found here