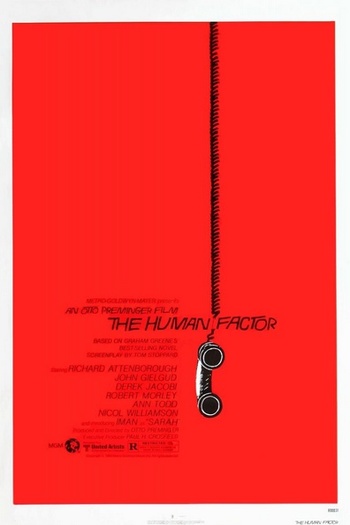 The Human Factor is a 1979 film directed by Otto Preminger.

Maurice Castle (Nicol Williamson) is an operative in the British spy agency MI6, working in the Africa section. He is hardly James Bond but instead is a worker bee with an office and a desk, and he has to share the office, with a fellow named Davis (Derek Jacobi). In the past however he worked in the field in South Africa, and from South Africa he brought back a wife (Iman, the supermodel, in her film debut) and an adopted son, Sam.

A South African intelligence officer arrives in England for a joint operation, and brings word that there is a suspected leak in MI6. Castle's superiors, Hargreaves and Dr. Perceval, get Daintry from internal security (Richard Attenborough, in his last acting role until Jurassic Park 14 years later) to hunt for the mole, but Hargreaves and Perceval themselves zero in on Davis—he's single, he drinks a lot, he likes strip clubs, he just generally fits their preconception of a mole.

Naturally, it's actually Castle who is the mole. He's been passing info on to the Soviets for seven years, not for money or for ideology, but for personal reasons that date back to his service in South Africa.

Otto Preminger's last film, an adaptation of a novel by Graham Greene. It was a Troubled Production in which Preminger had to sell a house and some art work to fund the film himself after his backers pulled out. John Gielgud appears in one scene as Watson, Castle's supervisor at the agency.