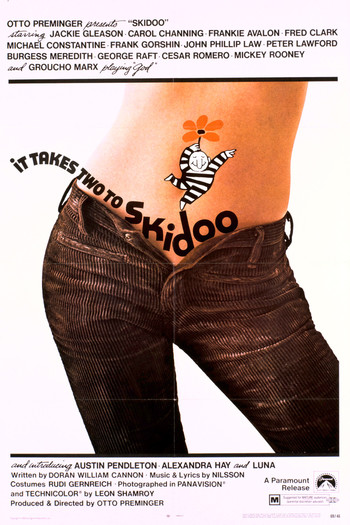 Skidoo was a 1968 comedy directed by Otto Preminger and featuring Groucho Marx in his last film appearance, alongside such other famous performers as Mickey Rooney and Jackie Gleason.

Gleason stars as retired gangster "Tough Tony" Banks (no relation), whose old boss, a mob leader named "God" (Marx), wants him to kill imprisoned stoolpigeon George "Blue Chips" Packard (Rooney). Meanwhile, Tony's daughter Darlene (Alexandra Hay) has joined a group of hippies who are being hassled by the police, so Tony's flighty wife Flo (Carol Channing) invites them all to live at the Banks house. Tony infiltrates Packard's prison, but decides not to go through with the hit after an accidental LSD trip enlightens him. God is not happy to hear this, so he takes Darlene hostage on his luxury yacht to force Tony's hand. Flo and Darlene's hippie friends go on a rescue mission, while Tony escapes from prison by dosing the inmates, the warden (Burgess Meredith) and a visiting senator (Peter Lawford) with LSD and flying off in a balloon made of garbage. What can we say? It was The '60s.