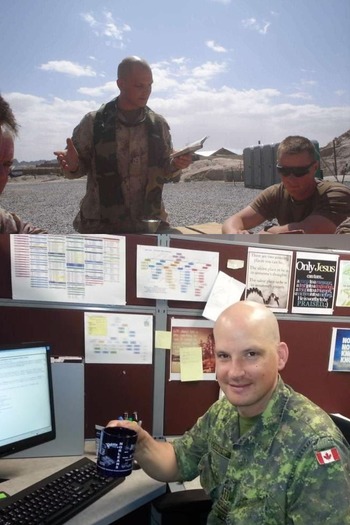 Truth in Television
"Stick close to your desk and never go to sea.
And you all may be Rulers of the Queen's Navee!"
— Sir Joseph, H.M.S. Pinafore
Advertisement:

A character in the military, police, or other action-oriented field who has been promoted to the rank of inaction or whose career path is oriented towards bureaucratic support of the boots on the ground. The character may only rarely be seen by the camera, since his or her job is Boring, but Practical: to make operations in the field run smooth, rather than engage in flashy heroics.

The Desk Jockey may be derided by other characters or viewers as an Obstructive Bureaucrat who is too far removed from the action to understand and accommodate the needs of the people he or she is supporting. They may catch a lot of flak for pinching pennies on necessary but expensive equipment while forcing the ground-pounders to kowtow to impractical and unrealistic institutional regulations.

Commonly found piloting desks in the cubicle farms behind the scenes of Action Series, since a serial of any significant length can afford to introduce these characters if a Lower-Deck Episode is necessary for budgetary concerns. If they get A Day in the Limelight, expect them to be made victim of the same kind of danger and violence that the rest of the cast face and either become the Badass Unintentional, the Action Survivor, or the Designated Victim, depending on the needs of the plot (and not necessarily their Backstory; even if they're a Retired Badass, they may be handed a Distress Ball anyway). Sometimes, they may be working here because a past injury or illness precludes them from serving at the front.

Differs from Kicked Upstairs in that the character may actually have been a competent Action Hero in his/her youth but couldn't avoid getting promoted on considerable merit. Some heroes will do anything it takes to persuade their superiors not to promote them, as examples will show.

Related tropes are Dude, Where's My Respect?, Victory Is Boring, Let's Get Dangerous! (the Desk Jockey is a classic candidate for this trope), Four-Star Badass (for direct aversion), and Authority Equals Asskicking or the more specific Badass Bureaucrat (for direct inversion).

Has nothing to do with Driving a Desk.

In Real Life military parlance, a Desk Jockey might be known also as an REMF "rear-echelon motherfucker", a "pogue" (etymology uncertain, though the usual story is that it comes from the Irish for "kiss my ass," but now backronymed to Person Other than Grunt), or a "fobbit" (someone who never leaves their Forward Operating Base). Among officers, it is common for officers to rotate between combat deployments and staff tours where they must become desk jockeys for a few years. In fact, the 1986 Goldwater Nichols Act requires any officer who wants to make General or Admiral to serve on at least one desk bound joint services staff assignment. Royal Air Force officers rotated from active flying duties to static commands on the ground ruefully describe their more sedentary role as "flying a desk".