Film / If Looks Could Kill 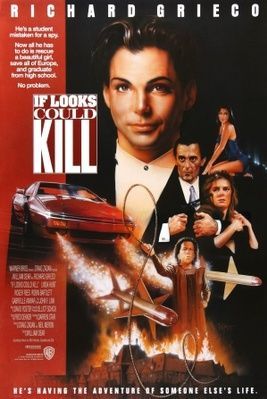 Mostly forgotten 1991 film in which (barely) high school graduate Michael Corben (Richard Grieco) of Detroit goes on a class trip to France and winds up being mistaken for an American CIA agent of the same name who is killed at the airport. Upon arrival he is immediately shanghaied into service by British Intelligence and partners with Mariska (Gabrielle Anwar), daughter of a former British operative, to stop Diabolical Mastermind Augustus Steranko (Roger Rees) from conquering all of Europe.

The film was written by Darren Star (pre-both Sex and the City and Beverly Hills, 90210), from a story by Fred Dekker (The Monster Squad, Night of the Creeps) and directed by William Dear (Harry and the Hendersons).

Has nothing to do with the song by band Heart.