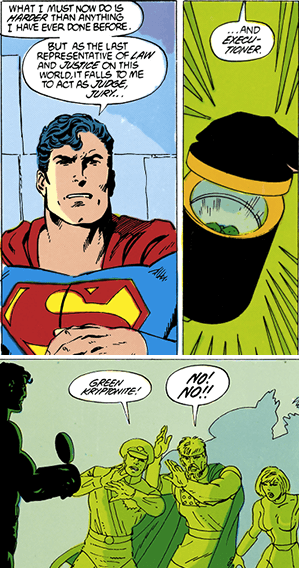 "But I've sworn to protect this sorry world, and sometimes that means saying and doing what other people can't — they shouldn't have to."
— Giles, Buffy the Vampire Slayer, "The Gift"
Advertisement:

When a character does an ambiguously (a)moral act because current circumstances make it the most pragmatic and logical thing to do. If The Hero performs the job himself, he may even go so far as to hide it from the rest of the cast (possibly with serious repercussions later) due to the risk of compromising his moral standards, or they might say What the Hell, Hero? to which he might reply I Did What I Had to Do. Otherwise, he may delegate it to the Anti-Hero or The Lancer, whose reputations won't be hurt as severely for the deed. May demonstrate What You Are in the Dark, and is a major reason why Being Good Sucks.

If one Shoots the Dog too often, one runs the risk of becoming a Knight Templar or Poisonous Friend. Alternatively, a Psycho Sidekick, popular in hard-boiled crime fiction since the 1980s or so, is a character whom the author approves of whose main purpose is to Shoot the Dog whenever necessary. The Spock is also likely to suggest Shooting the Dog and is the personification of this trope. Depending on the slant of the series, he will also be the one to carry about the shooting, or the characters will Take a Third Option at the last minute. If the author doesn't want to compromise his heroes' goodness, he'll have the Bad Guys Do the Dirty Work. One common way to show the emotional pain this causes is by showing the shooter cradling their kill.

This trope is named after the climactic scene of Old Yeller, where the protagonist shoots the "ol' yeller" dog he has come to love to spare him a miserable death from rabies.

For a diametric opposition that makes you cheer for the hero's senselessness, see Honor Before Reason. For extra anguish, make it a Senseless Sacrifice because the 'dog' is shot at a point when he's no longer a threat. (And never underestimate the power of Fridge Logic to turn an act from 'necessary' to 'but why??')

Note that this trope is not Kick the Dog But More So (the closest thing to that would be Moral Event Horizon); kicking the dog is the villain being evil just to show the audience how evil he is. Shooting the Dog is an ostensibly good character doing something that is necessary but morally grey — such as putting down the old family pet. (Past Experience Nightmares are far more likely after shooting the dog than after kicking it.) Senseless shooting of a dog would actually fall under Kick the Dog or Moral Event Horizon. And it also has nothing to do with the desire every 8-bit gamer ever has had to shoot the Duck Hunt dog.

This may or may not be confused with Don't Shoot The Puppy,

but do not confuse with Shoot the Shaggy Dog, which is a particular form of Downer Ending.

Compare/contrast with Jumping Off the Slippery Slope, Light Is Not Good, Omniscient Morality License, Well-Intentioned Extremist, Knight Templar, The Unfettered, Revolting Rescue, Cruel to Be Kind and Pragmatic Hero. If the act is presented as outright wrong (instead of hard but just) it may fall under Designated Evil. When a villain does the deed so the hero won't have to, it's Bad Guys Do the Dirty Work.

To contain radiation spillage before it can contaminate an entire populated city, Joe is forced to seal his own wife inside with the radiation once she's been contaminated.

To contain radiation spillage before it can contaminate an entire populated city, Joe is forced to seal his own wife inside with the radiation once she's been contaminated.