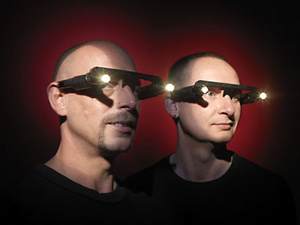 Orbital is a techno / electronica duo from England, consisting of brothers Phil and Paul Hartnoll. Within techno, their style ranged from acid to ambient to hardcore, with influences from jungle and soundtrack music.
Advertisement:

Their first single, 1989's "Chime", became a huge rave hit. Not long afterwards, Orbital started gaining fans outside the dance scene (they were one of the first techno bands to do so) due to the strength of their live shows and their emphasis on their albums as cohesive units rather than merely collections of songs. Their output through the '90s is commonly cited as among the best of the UK's techno scene. Unfortunately, after 2000 they released two albums that were respectively divisive and just okay. On that disappointing note, Orbital called it quits in 2004.

However, the brothers Hartnoll did not leave music altogether. Phil teamed up with Nick Smith to make the techno band Long Range, while Paul composed music fusing electronic and orchestral styles.

Then in 2009, Orbital reunited for a string of live shows, and in 2011 they returned to the studio to work on a new album. The result, 2012's Wonky, was surprisingly well-received, both by the critics and the fans. In 2014, they disbanded again, but with the promise that neither of them intended to stop making music yet. In summer 2017, they reunited again, playing more live shows and putting out a new single, and then a new studio album the following year. Time will tell where they go next.

For more exhaustive information, see the discography section of their website

Not to be confused with the ambient electronic duo The Orb.