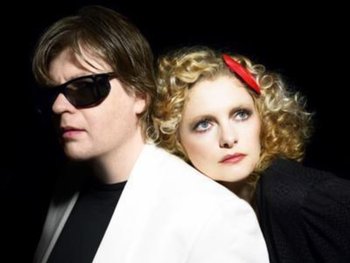 Left - Will Gregory. Right - Alison Goldfrapp
"Before u go and leave this town,
I want to see you one more time,
Put your dirty angel face,
Between my legs and knicker lace."
"Twist"
Advertisement:

Goldfrapp are a British electronic duo formed in 1999 by Alison Goldfrapp (vocals/synthesizer) and Will Gregory (synthesizer).

Their style has changed over the years - each album sounds very different to the one before, but roughly speaking, Felt Mountain and Seventh Tree are more subdued (the former is mainly electronic, the latter picks up a Folktronica influence), Supernature and Head First are more danceable (the former being electropop, the latter disco and very 80s-influenced), and Black Cherry seems to split the last two somewhat equally. This can lead to a bit of a Broken Base sometimes.

"Felt Mountain" is known for its trip-hop influences and movie-soundtrack sound, "Black Cherry" as the electro-clash album, "Supernature" as more straightforward electropop (and the first time they integrated electric guitar into their music), "Seventh Tree" as folktronica, "Head First" as 1980s revival disco pop, and Tales Of Us as a blend of Seventh Tree and Felt Mountain.

They have quite a large worldwide fanbase, due to their various styles and frequent commercial usage.

Alison Goldfrapp is also known for her work as a session vocalist with Orbital, Tricky, and others.

Their discography runs as follows:

I'm in love with the trope machine...: