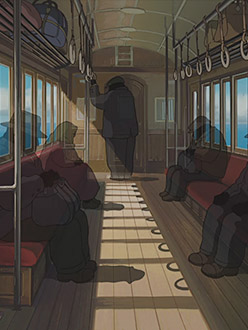 The train used to run in both directions, but these days it's a one-way ride.
On the road to hell there was a railroad track
And a train coming up from way down below
Better go get your suitcase packed
Guess it's time to go...
—Hadestown
Advertisement:

A recurring element in Oral Tradition and fiction. A sinister (or at least mysterious) phantom train beholden to no earthly schedule, often times in charge of transporting souls to the afterlife. A vehicular version of The Grim Reaper, then, minus the reaping (though that's not to say that the train that runs over people wouldn't be hilarious). Its conductor—if not the train itself—might play chess, too. The choice of a train is interesting in that trains are a relatively young technology, as mythologies go, but they've fit into this role extremely well. Doubtless the spooky train whistle helps. The mode of conveyance need not be an actual train — in fact, before the invention of trains, it was usually a ship — but it surprisingly often is. Perhaps it's that most people get on trains as passengers, with no control, and that, even for those running the train, travel is restricted to a fixed route, both of which reflect a lack of control for the soul.

This trope has antecedents in both Classical and Celtic Mythology. The Greek pantheon had the god Charon, whose job it was to ferry souls to the underworld in a boat across the River Styx. Ireland, meanwhile, had the cóiste-bodhar, the black coach that came for the souls of the dead.

A sub-trope of The Journey Through Death.

Contrast Flying Dutchman (another spooky means of transportation, but forbidden to go to the afterlife) and Ghost Ship (for normal derelict vessels).

Not related to the TV show Soul Train (though both do involve both gettin' on up and gettin' down).