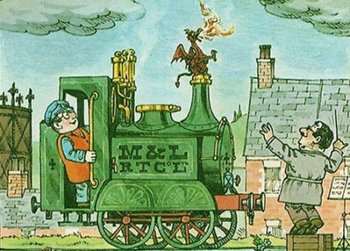 Not so very long ago, in the top left-hand corner of Wales, there was a railway. It wasn't a very long railway, or a very important railway, but it was called the Merioneth and Llantisilly Rail Traction Company Limited, and it was all there was. And in a shed, in a siding at the end of the railway, lived the locomotive of the Merioneth and Llantisilly Rail Traction Company Limited, which was a long name for a little engine, so his friends just called him Ivor.
Advertisement:
The Narrator, The Railway

Ivor the Engine, created by Oliver Postgate and Peter Firmin, tells the story of a little green steam engine who runs on the Merioneth & Llantisilly Rail Traction Company Limited, located in the top left-hand corner of Wales. Ivor is rather unusual for a steam engine in that he is alive (though most engine drivers would believe that already), and his life is far from an ordinary one.

His debut in 1958 was a short series of black and white episodes for Associated Rediffusion, which told the story as to how Ivor wanted to sing in the choir, and how his whistle was replaced with steam organ pipes from the fairground organ on Mr Morgan's roundabout. There then followed two thirteen-episode series, also in black and white. These episodes were 10 minutes each.

In the 1970s, the two longer black and white series were re-made in color by Smallfilms, with some alterations to the stories, but they did not remake, or re-tell, the content of the original six. The color series consisted of 40 five-minute films. These would often each form part of a longer story, including, most notably, a family of Welsh Dragons and an escaped elephant from the circus.

The series was written, animated and narrated by Oliver Postgate with Peter Firmin providing the artwork. The sound effects were endearingly low-tech, with the sound of Ivor's puffing made vocally by Postgate himself. The music was composed by Vernon Elliott and predominantly featured a solo bassoon, to reflect the three notes of Ivor's whistle.

A classic of British television, Ivor the Engine, along with other Postgate creations like Bagpuss, The Clangers, Pogles' Wood & The Saga of Noggin the Nog, continues to stand out for its unique charm, narrative quality, excellent characterization, wit, and lack of condescension.