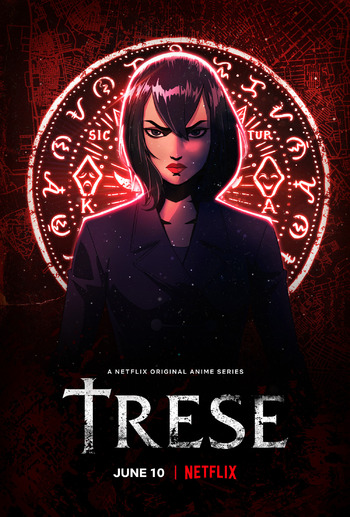 Kinakatakutan siya ng mga kinakatakutan mo.Translation She is feared by what you fear.
"There are monsters among us, some of them human."
— Alexandra Trese
Advertisement:

Trese is a Filipino-American co-produced animated series on Netflix, based on the Filipino comic series of the same name. It is produced by Singaporean-Malaysian company BASE Entertainment, directed by DC Universe Animated Original Movies veteran Jay Oliva, and animated by Lex + Otis Animation Studio, with Tiger Animation as the overseas animation producers.

Alexandra Trese (voiced by Liza Soberano in Filipino and Shay Mitchell in English), heiress to a family of monster hunters, is an investigator in Manila who solves crimes and other supernatural happenings caused by the creatures of the Underworld.

Hank Sparrow's ready to declare war on the monsters... Except he gets interrupted by a call on his mobile.

Hank Sparrow's ready to declare war on the monsters... Except he gets interrupted by a call on his mobile.