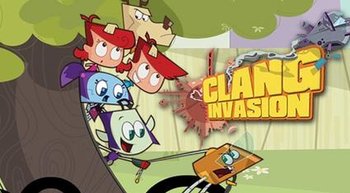 Clang Invasion is a 2007 Canadian-Singaporean-Australian animated series that aired on YTV and was created by Seng Choon Meng. Produced by Canada's Decode Entertainment (now part of WildBrain), Australia's Agogo Entertainment, and Singapore's Scrawl Studios, the series ran for 26 episodes over a single season.

In this show, three robots named Rivet, Widgit, and Socket, who are all from the planet Clang, crashland on Earth. More specifically, they crashland in a tree in a suburban backyard. There, the three little robots encounter and befriend a pair of 7-year-old gender-opposite twins named Robin and Daisy Harrison, as well as their pet dog Sam (whom the robots equip with a voice box on his collar that allows him to speak). Unable to return to their homeworld, Rivet, Widgit, and Socket proceed to go on a variety of adventures and misadventures with Robin and Daisy (often with the help of a wide variety of gadgets created by the robots), while the human twins make it their duty to keep the existence of the trio of alien robots a secret from everyone else