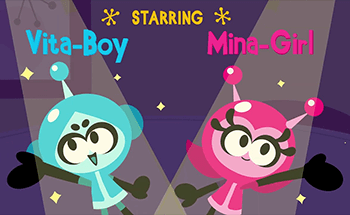 "Girls that wore pink
And boys that wore blue
Boys that always grew up better men
Than me or you."
— Joe Jackson, "Real Men"
Advertisement:

In fiction, and sometimes in Real Life, we tend to differentiate between "girly" colors and "boyish" ones. This is most obvious with babies, as we are prone to see girls dressed in pink and boys in blue. This kind of dichotomy is, in fact, relatively new, and has not been wholly consistent across time and place.

Prior to the Industrial Revolution and the development of synthetic dyes, rich saturated colors were expensive and time consuming to produce, thus limiting their use to those who could afford the high costs. Even into the 20th century, clothing for infants and toddlers – including among the upper classes – was often simply undyed or based on the natural hues of their fabrics (this was likely a case of Boring, but Practical, as such clothes would need to be washed much more frequently).

However, by the 19th century, distinctive color codes based on gender had started to emerge:

Note that lots of female characters have had a pink motif that they wear with pride and sheer badassery. Male characters as well, because Real Men Wear Pink. However, pink is sometimes considered too childish and disrespectful, especially to an adult woman, so red may be substituted. When it comes to eroticism, pink can be applied to both.

If there are Two Girls to a Team and one is represented by pink, the other girl will usually be represented by purple. A purple girl can be a goth, tomboy, or Proper Lady, while the pink girl is usually The Chick and/or a Genki Girl. Purple has a variety of associations, not limited to Purple Is Powerful and Graceful Ladies Like Purple — it's also indicative of nobility and, by extension, nobility of character.

Can crop up in many Boys' Love and Girls' Love stories; the active partner (Seme in BL, tachi or Onee-sama in GL) is unlikely to wear "girly" colors such as pink, but the passive partner (Uke, neko) frequently does, and (especially in GL but sometimes in BL) may even have pink hair.

Not to be confused with Blue Boy.