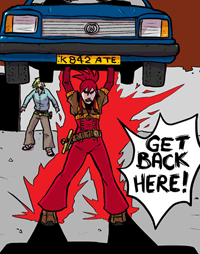 A webcomic updating Wednesdays and Sundays since September '09. An action comedy with visuals influenced by manga, as well as retro psychedelia, about snarky British magical knights.
The tone of the comic is largely tongue-in-cheek, often combining serious ongoing story elements with a gag-a-day style punchline, and revelling in using the characters super powers to do very silly and/or awesome things, such as the car-throwing illustrated at left.
Advertisement:

Rekki Lune, a hot-tempered knight with Super Strength and a sword nearly as big as she is and her laid back indestructible hippy partner Subo set out on the trail of a bunch of political extremists armed with Magitek ray guns. The story is set in an alternate universe England called Anglise, where there are magical knights, and the technological level and aesthetic resembles the mid-late 20th century, particularly the 70s.

It's drawn by Kate "Darth Mongoose" Holden, occasional troper and British manga artist from Oop North, and updates on Wednesdays and Sundays. It started off on DrunkDuck,

now it has its own site.