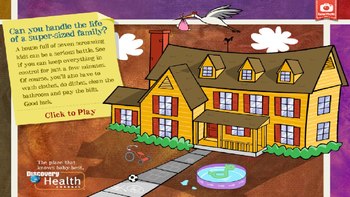 Can you handle the life of a super-sized family?
Advertisement:

is an online game where you play as the parent of seven children: Torri, Christian, Duncan, Sullivan, Virginia, Jessica, and Jonathan. It makes the game seem challenging by giving it dramatic music and earning you an army title like "general" or "private" based on how well you played.

You play it using the mouse button and have eight rooms to navigate between: downstairs, there's the bathroom where you clean, the hallway where you pay bills, the kitchen where you load the dishwasher, and the laundry room where you, well, do laundry. Upstairs, there are the kids' bedrooms: Torri has her own room, while Christian and Duncan share a room, Virginia shares with Sullivan, and Jessica shares with Jonathan.

It also features a Christmas version called "Holiday House", whereupon you need to make cookies in the kitchen, write Christmas cards in the hallway, answer the door for carollers, and it also features the living room, where you wrap gifts.

You are made to guess what the kids need by what they're doing. Here are the things they can need:

There is also a "panic" button, which you can press for a maximum of three times, that makes Torri reset all the problems.