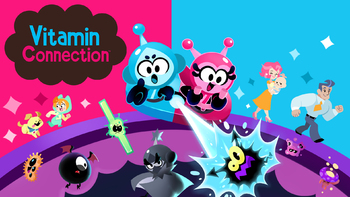 When viruses make their move and cause havoc in the human body, you can count on Vita-Boy and Mina-Girl to purge them and repair any damage and sickness that had occurred in their wake! And what better time than now, for a humble little family known as the Sable Family is going through some disease-related problems themselves, that only our lovable microscopic duo can solve!

Exclusively made for the Nintendo Switch by Wayforward Technologies, Vitamin Connection is a very cute and quirky shooter game with a control scheme similar to Robotron: 2084 where the goal is to help Vita-Boy and Mina-Girl clean up the viruses and diseases that lurk inside the bodies of the Sable Family. To sweeten the deal, there are even some mini-games thrown in for good measure!

Vitamin Connection has examples of: