Manga / My Senpai Is Annoying 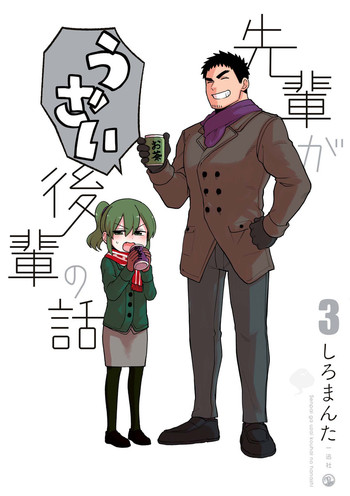 My Senpai Is Annoying (known in Japanese as Senpai ga Uzai Kouhai no Hanashi, "Story of a Kouhai Annoyed by her Senpai") is a Slice of Life office comedy webmanga by Shiro Manta, which began serialization in the digital manga magazine Comic POOL in 2017.

Igarashi Futaba is a hardworking young Office Lady who has an annoying senpai, Takeda. She constantly complains about his loud and boisterous personality, but her friends and coworkers can see through her complaints and that she actually has romantic feelings for him. Meanwhile, Futaba struggles to come to terms with those feelings herself.

An anime adaptation started airing in October 2021, produced by Dogakobo.

My Senpai Is Annoying provides examples of: