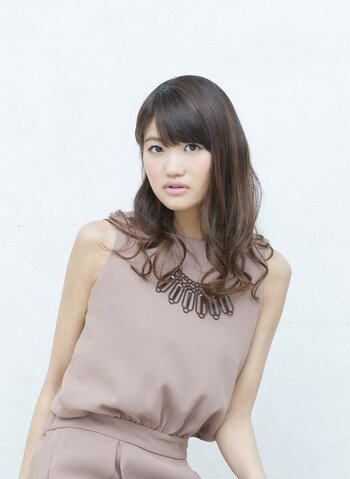 My Onii-sama will make the impossible possible!
Advertisement:

She mainly plays the role of the feminine, good-natured and Ojou girls, sometimes performing the role of cold-tsundere type A / kuudere such as Yukino Yukinoshita in My Teen Romantic Comedy SNAFU. At the same time, although Saori is widely known for a number of her main heroines like Miyuki Shiba or Shinoa Hīragi, her supporting characters sometimes criticized by audience for certain monotony.

Her voice is also very easy to confuse with Mamiko Noto because of the almost identical manner of conversation and the very similar feminine and relaxed voice. It does not help that the types of their heroines are usually very similar, although in general, Saori usually does not play adult women, limiting themselves to the threshold of 17-18 years.

She is also very fluent in English, and is noted to have an exceptionally good singing voice, which to the best demonstrated in her debut album Live Love Laugh. For the same reason, she is often involved in the recording of the soundtrack for the projects she partakes in, usually the ones in which she plays the leading role.

Relationship Voice Actor with Yūichi Nakamura, with whom they at least four times portrayed the relationship between the protagonist and girl who one-sided in love with him, ironically, two of which have Brother–Sister Incest as a central romantic line and Kana Hanazawa as Romantic Runner-Up.

Of course, she's nowadays starting to get milked for a lot of new roles, so right now she so happens to be in high demand for a lot of current projects, possibly matching up to Miyuki Sawashiro's resume.

No relation to Show Hayami. Her unofficial nickname is 'Hayamin'.

These are Saori Hayami's roles, I said with a posed look:

Sasuga onii-sama! Now where is my coffee?
Psh. This page is ten years too early to describe the greatness of onii-sama! *Ahem* No... I think it's time for the index...