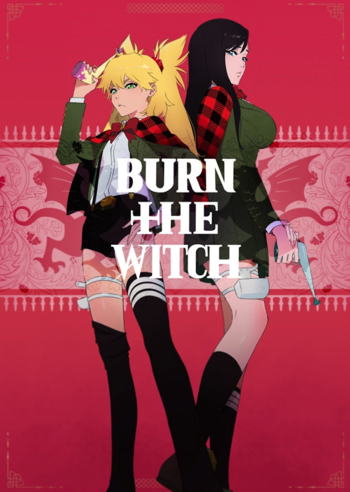 BURN THE WITCH is the third manga from Tite Kubo.
Advertisement:

The series takes place in London and follows two witches, Noel Niihashi and Ninny Spangcole, who work for an organization named Wing Bind, which fights against malicious dragons that threaten the human populace. Things get complicated when a human named Balgo, whom Noel is acquainted with, ends up the target of a dragon attack.

The manga started as a one-shot in 2018. On March 20, 2020, in a livestream that also announced the anime adaptation of Bleach's "Thousand Year Blood War" arc, it was mentioned that the oneshot would receive a theatrical anime short by Studio Colorido. The series began serialization in Shonen Jump on August 23 of the same year.

The one-shot can be read for free on Viz's website

. Has nothing to do with the trope Burn the Witch!... we think.