Superman Stays Out of Gotham 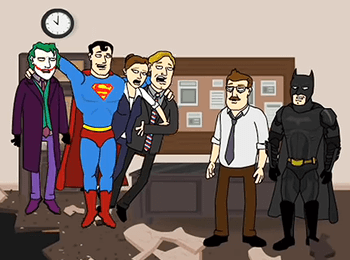 The Dark Knight ends an hour early.
Superman: But dude, you know what I would've done?
Batman: Oh, I don't know, probably just—
Superman and Batman [simultaneously]: Fly really fast, saving everyone from the bullets and explosions!
— How It Should Have Ended for The Dark Knight
Advertisement:

It's simply a fact that some characters are more powerful than others. This trope comes into play when two or more characters who are on the same team have blatantly different levels of power and live in the same universe, but the stronger of them always stays out of anything the weaker character(s) have trouble with. This is because their powers would instantly solve the problems of the weaker hero(es), thus failing to preserve drama and cutting the plot short.

This commonly happens with Badass Normal heroes, who are defined as such because they live in a Shared Universe of wizards, literal supermen, flying tank armored guys, cyborgs or everything in between. This gives the writers plenty of opportunity to develop their heroes in contrast to their super-powered neighbors, while at the same time being able to focus on the more mundane issues taking place in the hero's own backyard. While this hero can learn to become a part of the everyday reality of his not-so-normal colleagues, and even fight alongside them, it's much more difficult to do the other way around: most of the time, the more powerful heroes could easily fix any problem the weaker heroes have in a heartbeat... and that would make for a pretty dull storyline. Often, this is avoided by simply keeping the demi-Gods of comic continuity out of the less talented heroes' homes altogether. This is especially true if the hero is so thoroughly associated with a common everyday problem, characteristic or element that solving it would damage their franchise. In that case, it simply ever won't be solved — even if the hero's superpowered friend could fix it at once. More often than not, the problem is so integral to their own works that most readers simply accept it. Any crossover team-ups between the heroes will usually Hand Wave away the possibility of the stronger hero making any substantial impact in the badass normal's livelihood.

It's not strictly limited to Badass Normals either; some heroes endure heaps of abuse just for being a superhero that can metastasize into Super Registration Acts and other anti-superhero hindrances that never end up on the radar of their colleagues.

Common in works starring the Anti-Hero. The plots and characters within their own works take place in their own hometown with its own tone and rules for the genre of acceptable morality and realistic plot resolutions. This leads to Fridge Logic when Green Rocks-based innovations that would work under any other circumstances that have been used numerous times are proposed but they just won't work for that specific hero, resulting in a Broken Aesop.

A less-common Double Subversion is when the hero calls upon his pantheon of super-allies for help in solving some intractable problem that they may or may not have solved before, only to get back a unanimous "There is nothing we can do" response.

A sub trope of Reed Richards Is Useless. Compare This Looks Like a Job for Aquaman, Fantastic Aesop, Status Quo Is God, Plot Technology, The Only One, and Law of Conservation of Normality. Contrast Superhero Capital of the World. For this as a learning/interaction trope, see Die or Fly or Sink-or-Swim Mentor. When Badass Normals and other heroes could become superpowered or much more powerful rather easily and then clean up their respective areas instead of some other hero, but for some inexplicable reason don't, that's One Super One Powerset. When the situation is explained by having the more powerful heroes busy dealing with some other problem, that's Hero of Another Story.