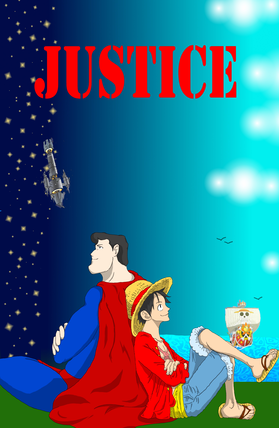 Justice is a crossover between the DC Animated Universe and One Piece by Black' Victor Cachat, who is also the author of Ace Lives, Luffy's Mother is WHO?, and Sea Of Souls. The fic was published in 2017 and is still ongoing.

After an unnamed incident, the Straw Hat Pirates find themselves trapped in the world of the Justice League. They now search for a way back home, gathering allies and technology. But this ends up putting them in conflict with the Justice League, who sees the pirates as criminals, while the Straw Hats disapprove of the others claim of "Justice".

or on AO3 here

. A Spanish translation can be found here.