Fanfic / The End of Ends 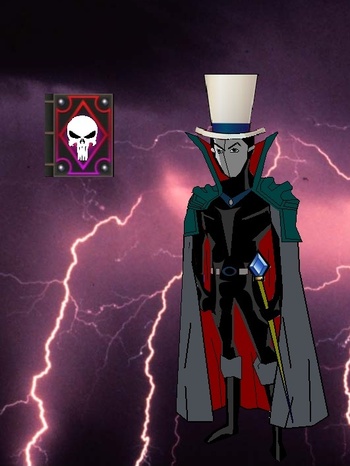 Count Bleck is gonna sue someone.
"From the desk of Dakari-King Mykan, comes a tale of sadness, anger, and a vengeance most foul."
— Opening words that copy Bonejangles' from Corpse Bride.
Advertisement:

What do you get when you take the plot of a well-known spinoff game and change the setting and characters to reflect the author's interests? Something close to the lines of this story.

Beast Boy, saddened by the events of the episode "Things Change", finds his life tumbling down and in a fit of depression, runs away from Titan Tower and quits the Titans. Shortly after this, a black hole opens up in space and starts to suck in Earth, as well as other galaxies. As this is happening, Jump City is attacked by three villains, all of whom serve a higher power: Count Logan.

After a brush with the three minions, the Titans are shocked to learn from the Doom Patrol that Beast Boy was killed. Thus begins a struggle between the Titans and Count Logan, who plans on destroying the entire galaxy with the help of an ancient artifact forged by Trigon known as the Dark Prognosticus.

The End of Ends is a fanfic written by Dakari-King Mykan, known most infamously for My Brave Pony: Starfleet Magic. It's both made in Web Animation format as well as a Fan Fiction adaptation where the story has a Framing Device wherein an Alternate Universe Terra and Beast Boy see the events. The first part of the Web Animation can be watched here

, the original fanfic (called "Things Change & The End?" there) can be read here

, the updated fanfic (called "Musical: The End of Ends" there) can be read here

and the fanfic that crosses over with My Little Pony: Friendship Is Magic there

. There is also a sequel story called The End of Ends II, which can be read here

. The page will mostly refer to the videos, however.

The End of Ends has the following tropes: