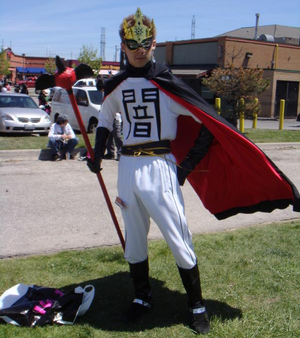 Dakari-King Mykan (real name: Michael Mikulak) is a Canadian fanfiction writer, best known for works such as The End of Ends and My Brave Pony: Starfleet Magic. He began writing fanfiction in the early 2000s as part of the Digimon Adventure 02 fandom. These fanfics, where he championed the couple of Davis and Kari (the word Dakari being his portmanteau for the couple), led to him becoming a prominent figure in a shipping Flame War. He and several others ended up getting banned. He would eventually return in 2006, now primarily writing for the Teen Titans and 6teen fandoms. He would steadily gain infamy over the years, gaining the attention of the now-defunct fanfiction MST website Project A.F.T.E.R., and culminating in the release of "My Little Unicorn: Magic is Believing" in 2012, a Hate Fic based on My Little Pony: Friendship Is Magic.

Mykan also has a presence on YouTube, where he is best known for Beast Boy's Magic Voices, a series of Teen Titans AMVs that are edited with Microsoft Paint and Windows Movie Maker. He also does a series titled Teen Titan Idol, an extension of Magic Voices where fans can vote on which characters get further music videos. Despite the reception to his fanfics, his videos are more popular, with over 10,000 subscribers and a few of his videos breaking the million-view mark.

His works can be found on MediaMiner

(Note that most of his fanfics there have only one chapter due to run-ins with site moderators), YouTube

Commonly Used Tropes in his Stories