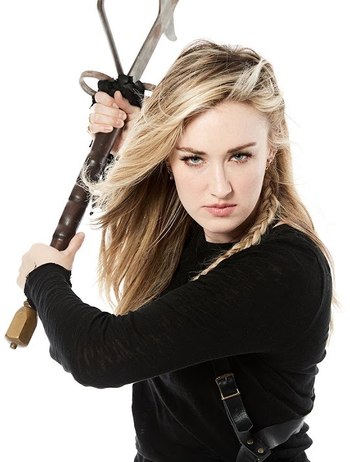 A long time ago, Ashley Suzanne Johnson (born August 9, 1983) was best known for her two-season role as Chrissy Seaver on the sitcom Growing Pains.

Once she started voice acting, she became a lot more popular. Her roles include her star-making turn as Ellie in The Last of Us and its sequel, but also Terra in Teen Titans, Gretchen Grundler in Recess, Gwen Tennyson in Ben 10: Alien Force, Petra in Minecraft: Story Mode and Tulip Olsen/MT in Infinity Train. Often paired with Greg Cipes, leading him to call her his "cartoon girlfriend" as their characters are frequently lovers.

On TV, she played the forensics scientist Patterson for five seasons of the NBC series Blindspot. She's part of Joss Whedon's Production Posse, having appeared in Dollhouse, an adaptation of William Shakespeare's Much Ado About Nothing, and (most infamously) The Avengers (2012) as the waitress who gets saved by Captain America. Reportedly, her character was set to have bigger role in the MCU, but this was ultimately scrapped. And, when her filming schedule allows, she appears alongside several voice actor friends in Critical Role, a weekly Dungeons & Dragons campaign streamed live. She takes on the role of the gnome cleric Pike Trickfoot in the first campaign, the fallen aasimar barbarian Yasha Nydoorin in the second, and the faun druid Fearne Calloway in the third.

She attends the International School of Music, where she studies Violin and Piano; and also plays guitar and cello. When not acting or studying music, Johnson co-runs the photography company Infinity Pictures, with her friend, production assistant Mila Shah. She loves to snowboard and surf, was taught to sail by her father, and she is an avid video game player. She has been in a relationship with cheeseless quesadilla lookin' orphan Brian Wayne Foster, former host of Critical Role's Companion Show Talks Machina, since 2012 and in December 2018 they announced their engagement.

Her older sister Haylie is also a former actress.

Example of:
Put on a Bus