Video Game / The Last of Us Part II

Due to its nature as a sequel, spoilers for The Last of Us and the Left Behind DLC will be left unmarked. You Have Been Warned! 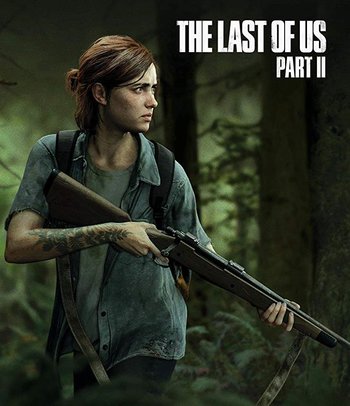 The Last of Us Part II is the sequel to The Last of Us, developed by Naughty Dog and published by Sony Interactive Entertainment for the PlayStation 4.

Its story opens a few years after the end of the first game, and once again follows Action Survivors Ellie and Joel in a United States that has been destroyed by a fungal based Zombie Apocalypse. After a violent encounter with another survivor group, a now 19-year old Ellie embarks on a Roaring Rampage of Revenge across the shattered country.

The game was released on June 19, 2020, after being delayed amidst the COVID-19 pandemic and a major Content Leak. The story for a potential sequel has been outlined but ND has no immediate plans to develop it.

The Last of Us Part II provides examples of the following tropes:

open/close all folders
Tropes #-D
Tropes E to J
Tropes K to N
Advertisement:
Tropes O to Z
If I ever were to lose you
I'd surely lose myself
Feedback