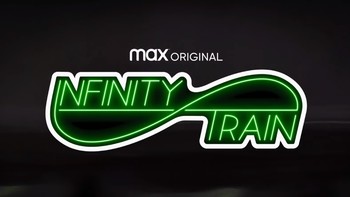 All Aboard!
"It feels like every time I find something logical about this train, it's thrown back at me and I'm stuck without answers."
—Tulip Olsen
Advertisement:

Infinity Train is an animated Science Fiction anthology series created by Regular Show storyboard artist Owen Dennis and produced by Cartoon Network Studios. Each season revolves around events on a mysterious, seemingly endless train in the middle of a vast wasteland on which troubled individuals suddenly awaken to find themselves as reluctant passengers. Now sporting a strange glowing number on their hand, these people have no choice but to make their way through the worlds and puzzles presented by each car in order to find a way home.

The original pilot was released on November 2, 2016 as a "Cartoon Network Minisode". The short received over a million views within a month and remained the most popular original short on the company's YouTube page until its eventual deletion. On March 2, 2018, a teaser site opened, revealing that a full-length series had been greenlit for a 2019 premiere. The first two seasons aired on Cartoon Network, with the show being rebranded as an HBO Max original series for its final two seasons.

During the airing of Book 3, it was revealed that the show's future was uncertain due to Cartoon Network's misgivings about the appropriateness of its themes for younger audiences. The series would end production in December 2020, with series creator Owen Dennis later confirming that Book 4 would be the final season. Dennis, meanwhile, also made it clear that he and his team weren't entirely finished with the show's universe just yet, and are trying to explore other avenues of expanding on the story.

On August 19, 2022, Infinity Train and all related materials were removed from HBO Max and other streaming services, along with every Cartoon Network and HBO Max social media video and post that ever acknowledged the show's existence. In response to this, Dennis began encouraging fans to Keep Circulating the Tapes, though he also points out

that the full series remains available for purchase on digital storefronts like iTunes and Amazon, and that he will have the rest of the story told somehow.