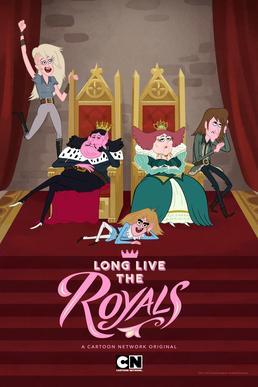 "Previously, on Long Live the Royals..."note From left to right: Rosalind, King Rufus, Alex, Queen Eleanor, and Peter
Nowhere to run to
So let's run nowhere together!
Can't understand it
But everything is gonna be just fine!
These days gone by
Seem to last forever!
Yeah, yeah, yeah~
—Long Live the Royals theme song
Advertisement:

Long Live the Royals is a four-part animated Mini Series created by Sean Szeles, writer and supervising producer on Cartoon Network's Regular Show. Based on the Emmy Award winning short of the same name, this served as the second original mini-series produced by Cartoon Network Studios, following Over the Garden Wall. The series aired from November 30th to December 3rd, 2015.

The mini-series is a quasi-soap opera taking place in a Schizo Tech world, and follows the activities of your typical royal family as they prepare for the annual Yule Hare Festival (which is like Thanksgiving, but with more archery and guacamole) and deal with traditional family issues. In contrast to Over the Garden Wall, which utilized a large cast of operatic and folk singers, the characters in Long Live the Royals were voiced by prominent American comedians such as Fred Armisen and Jon Daly.