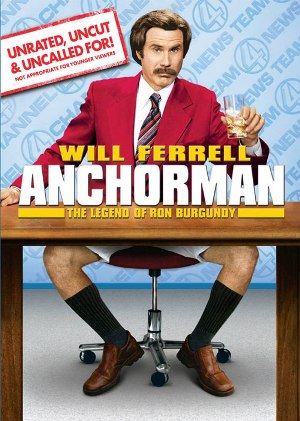 A consummate professional.
"I'm not wearing any pants. Film at 11."
— The Kentucky Fried Movie
Advertisement:

In television, film, and especially comics, it is conventional to focus on the upper body, since the upper body is usually the most expressive part of any character. Face, arms, and torso all convey more information to the audience than the legs. In some works, you're doing little more than watching actors talk, and anything other than the face is superfluous anyway.

This has led to the framing of many scenes in many media to lack any onscreen representation of the body below the waist. The legs are still there, of course, just Behind the Black. But what is covering those legs? In many cases, the creators decide to play with this and reveal that the person whom the audience assumed to be fully clothed is naked from the waist down. This is especially common with TV presenters such as news anchors, because they usually sit behind a desk for the broadcast.

"Not Wearing Pants" Dream is where this happens in a dream sequence, but this is when the audience (at least initially) cannot see that the character is pantsless, whether it's in a dream or not.

Remember, to be this trope, you must meet the following criteria:

A subtrope of Reveal Shot.

Owen is ironing his shorts for his video conference with the Park League, but he doesn't finish in time and does the conference pant-less.

Owen is ironing his shorts for his video conference with the Park League, but he doesn't finish in time and does the conference pant-less.