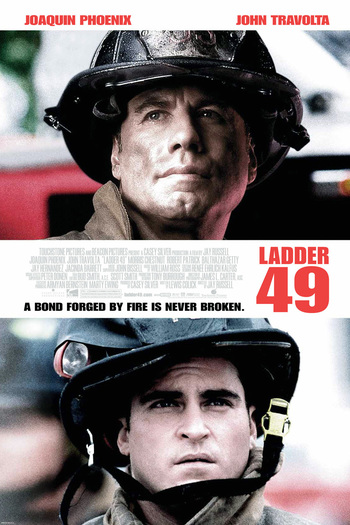 A 2004 drama film, directed by Jay Russell, that follows the life and heroics of Baltimore City Firefighter Jack Morrison (Joaquin Phoenix) from his first day on the job to his last fire, the focal point of the film. It also stars John Travolta as Deputy Chief Mike Kennedy, his former Captain with whom he develops a very close friendship, and Jacinda Barrett as Linda, Jack's eventual wife.

The film opens with Jack saving the life of a man who is trapped in a blazing grain elevator. However, immediately after doing so, the grain dust in the building explodes, resulting in the inside of the building collapsing underneath him. Jack falls several floors, breaks his leg, and is trapped among the rubble. The movie cuts back and forth between important scenes from his life (him meeting and eventually marrying Linda, the birth of their first child and their joys and struggles as a family); his working and bonding with his fellow firefighters; several major fires (each of which has a profound impact on Jack and/or his family); and his own attempt to escape to a safe area of the building in order to be rescued by his fellow firemen.