Series / Malcolm in the Middle 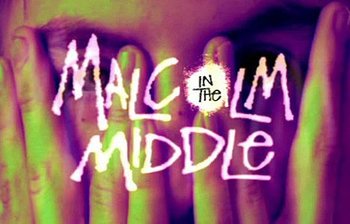 For the record, that's how you'll be watching most of the episodes.
"Life is unfair..."
— They Might Be Giants
Advertisement:

Malcolm in the Middle is Fox's first live-action Dom Com of the 21st century, which seemingly set out to outdo all existing "dysfunctional family" sitcoms—and did a pretty good job of it, something that hadn't been done since the days of Married... with Children and Roseanne, as live-action suburban dysfunctional sitcomsnote the animated ones like The Simpsons and Family Guy are still popular, even in the face of Adult Swim's shows and South Park started to wane in popularity, with the likes of Seinfeld and Friends (which focus on wacky characters living in the big city) gaining popularity over them. It originally ran from 2000 to 2006, with a total of 151 episodes in seven seasons.

The titular Malcolm is the frustrated and eternally-perplexed "middle" child of a middle-class home (hence the title of the show), who is discovered to have a genius-level IQ. The show follows his attempts to keep his head down and get through life despite the social stigma of being "smart" and the rest of his family: his sociopathic brothers, consisting of oldest brother Francis (who was shipped off to military school and often has his own B-plot in an episode), next oldest brother Reese (dense and violent school bully) and younger brother Dewey (self-sufficient and almost unflappable amidst all the chaos, and possibly even smarter than Malcolm). Their behavior has rubbed off on Malcolm himself, and a newborn, Jamie, was born later in the show's run (with hints he may become the most conniving of all the kids). His parents include emotionally-immature father Hal and overbearing and perpetually-stressed mother Lois, against whom most stories involve the kids doing battle. Malcolm would also frequently break the fourth wall by giving an Aside Comment to the audience to explain various plot points or his thoughts on whatever was happening, though this became less frequent as time went on.

The show also had the advantage of being shot film-style instead of in front of a live studio audience, and the added freedom allowed it to have tighter pacing and a surreal tone more reminiscent of an animated cartoon (although, if mishandled, could also cause confusion). Also helping achieve this was that it was an early example of a live-action sitcom (especially on network television) that lacked a Laugh Track or Studio Audience - it, along with other sitcoms like The Bernie Mac Show, Scrubs, Everybody Hates Chris, and The Office led to the different, laughter-free, single-camera style becoming a unique sitcom style going forward, with Malcolm sometimes cited as the Trope Codifier of said style.

Malcolm in the Middle contains examples of:

Aliens Landed Down The Street!

It's not too complicated to trick Reese into thinking there's an alien invasion.

Aliens Landed Down The Street!

It's not too complicated to trick Reese into thinking there's an alien invasion.