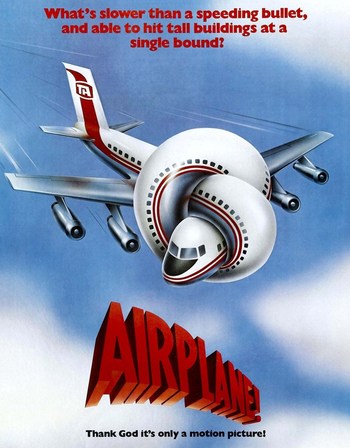 Airplane!? What is it?
It's a big metal thing with wings, but that's not important right now.

The film that solidified the team of Jim Abrahams and brothers David and Jerry Zucker as comedy icons. ZAZ's directorial debut,note They previously wrote The Kentucky Fried Movie, but John Landis directed Airplane! (1980) — titled Flying High! in Australia, New Zealand, South Africa, Japan and the Philippines — is a comedic remake

of the 1957 disaster film Zero Hour! (itself based on the TV movie Flight into Danger).note In fact, even though lawyers assured the creative team that they were protected under parody, they went ahead and bought the Zero Hour! script and license for $2500 just to be sure! Subplots from Airport (1975) also appear, such as an airline stewardess (or flight attendant) having to keep the plane under control for a while, a singing Nun, and a little girl on-board in need of an organ transplant.

The plot: Ted Striker (Stryker in Zero Hour!), an ex-military pilot, has to get over his personal traumas to pilot a commercial plane after the crew is stricken by food poisoning, and reconcile with his estranged girlfriend at the same time. Hilarity Ensues. Take that basic plot, and have a silly joke every three seconds. In fact, that is partly what makes the film work: if a joke falls flat, move on to the next one. Of course, further analysis of the jokes will just hurt the humor of it all. Just see the film for yourself. Along the way, it singlehandedly destroyed the Disaster Movie as a serious genre for over a decade.

This film started Leslie Nielsen (Dr. Rumack) out on a whole new career starring in silly comedies. In fact, Nielsen's subsequent Leslie Nielsen Syndrome kind of ruined the main joke of his casting, which was to have a deadly serious leading man (he'd been in Forbidden Planet!) saying utterly ridiculous lines. The same happened to Lloyd Bridges (Steve McCrosky), but not Robert Stack (Rex Kramer). In fact, for Stack, the reverse happened — he became the host of Unsolved Mysteries, which required a serious man to say ridiculous lines while remaining dignified.

Airplane! was hardly the Trope Maker, but it's often viewed, even today, as a major Trope Codifier of the parody film. It was followed by a sequel called Airplane II: The Sequel in 1982, which didn't have any involvement from ZAZ, who collectively claim neither to have seen it nor have any interest in seeing it.

"Surely these aren't examples!" "They are examples, and don't call us Shirley.":

"I just want to tell you both good luck. We're all counting on you."
Feedback

After both pilots become sick, from the mysterious illness that has effected most of the passengers, Elaine tries to calm everyone down, which seems to work...until, she asks if anyone knows how to fly a plane.

After both pilots become sick, from the mysterious illness that has effected most of the passengers, Elaine tries to calm everyone down, which seems to work...until, she asks if anyone knows how to fly a plane.