Film / Since You Went Away 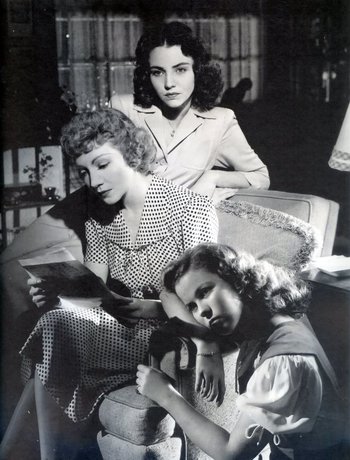 Since You Went Away is a 1944 drama film directed by John Cromwell, starring Claudette Colbert, Jennifer Jones, Joseph Cotten, and Shirley Temple.

The Hiltons are a well-to-do American family living somewhere in Flyover Country. Patriarch Tim Hilton has just left for Army service in World War II when the movie begins, leaving his wife Anne (Colbert) and their teenaged daughters Jane (Jones) and Brig (Temple) to cope with life on the home front while he's away.

Forced to save money after losing Tim's civilian salary, the Hiltons take in a boarder, Col. Smollett (Monty Woolley), whose grandson Bill (Robert Walker) soon falls for Jane. Anne, left adrift by her husband's absence, dedicates herself to the war effort. Also in the picture is Navy lieutenant Tony Willett (Cotten), an old family friend who obviously carries a torch for Anne.

Produced for United Artists by David O. Selznick (who also wrote the screenplay), the film was nominated for a large passel of Academy Awards, and won some of the minor ones.