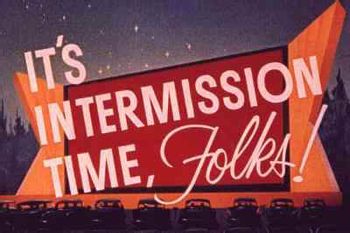 "Does this story you're telling have an end? Do we at least get a bathroom break like they had in Battle of the Bulge?"
— Eda, Black Lagoon
Advertisement:

Once Upon a Time, when bladders were smaller, attention spans were shorter, and people actually went to the theatre to see films instead of illegally streaming them off the Internet, there was a thing called an intermission. This was a time when people got out of their seats and walked around in the lobby talking with their fellow patrons of the arts and using the facilities. This broke up the pacing of a film and changed a monolith into something considered in smaller parts. During the intermissions themselves, it was common to show cartoons with catchy jingles enticing the audience to head to the lobby and buy themselves some refreshments.

Especially at drive-in theaters, it was common to show a "double feature" of two separate movies (which might, or might not, have a shared theme) with a longish intermission between. See Grease in the Film section below for an in-universe sample.

These days, intermissions are far less common, but that hasn't stopped them from popping up in all sorts of media, including a few where they don't even seem to make sense, such as webcomics. Films are still the most common source outside of live theatre though, especially Epic Movies. Notably, intermission is still standard practice in Bollywood, because Bollywood films have absurdly long running time by Hollywood standards (the average length is three hours), thanks to the existence of several lengthy musical numbers. The practice is so ingrained to the point that Indian theaters often force intermissions to films imported overseas, including Hollywood flicks that run for no longer than two hours.

In Theatre, intermissions are still standard practice. They provide a break to let the stage crew change the set around. Also, theatrical productions tend to be relatively long, and also tend to frown heavily on people leaving and returning during the performance, so intermissions are much more of a biological necessity. (And actors need bathroom breaks, too.) There also an economic benefit, as theatres can make some sales at the bar and/or snack food stands (but the food and drinks have to be consumed outside of the auditorium). In other media, standards tend to be more lax. As almost all theatre productions involve intermissions, don't list one of them here unless it's particularly noteworthy.

Lengthy concert performances by musicians or stand up comedians may also include an intermission, to give the performers a break and to allow for possible changes in the lineup. During the intermission, backup performers may provide light ambient music to entertain people who don't choose to leave their seats, but featured pieces will be reserved for when the show resumes.

This trope exists in sports as well. American football and basketball have halftime. In American baseball, an intermission takes place in the middle of the seventh inning, and is referred to as the "seventh inning stretch". National Hockey League games usually have two intermissions of about 18 minutes each.