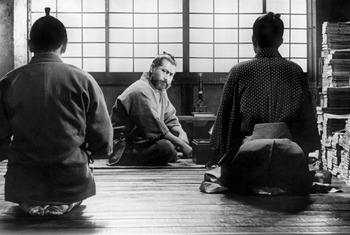 The protagonist of the film is Dr. Yasumoto—samurai, recent graduate of the medical school at Nagasaki, and disappointed in love. He's even more disappointed when he learns that instead of the prestigious post with the shogunate he'd expected, Dr. Yasumoto is assigned to a public clinic that provides free care for the poor. At first, the arrogant young Yasumoto is determined to be as contrary as possible so that Red Beard will fire him.

Over the course of the story, Dr. Yasumoto learns from his experiences and Red Beard's gruff wisdom, becoming both a better doctor and a better human being.

This film marked the end of the creative partnership between Mifune and Kurosawa that dated back to 1948's Drunken Angel and included almost every film Kurosawa made over a period of 17 years. The two had a falling out and didn't speak for over 20 years, although they did reconcile in the 1990s.