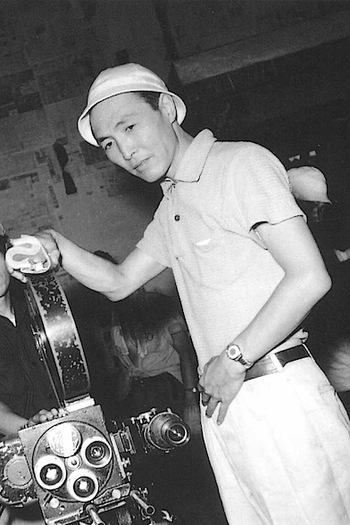 The man at work.
"Monsters are born too tall, too strong, too heavy—that is their tragedy."
— From the man himself
Advertisement:

Ishirō Honda (本多猪四郎 Honda Ishirō; 7 May 1911 – 28 February 1993) is one of the well-known directors of Toho, perhaps most famous for his Shōwa era Godzilla films.

Born in 1911, Honda was raised by a Buddhist father, who instilled in him a positive outlook in life. He was drafted into the Imperial Japanese Army in the 1930s and again during World War II, in which he was a foot soldier (putting his movie career on hold for a while). As a film director, for the majority of his early career, he directed propaganda films. Honda's ultimate life-changing experience was the Atomic Bombings of Hiroshima and Nagasaki, which haunted him forever afterward. Poor guy. When Godzilla was being produced, Honda decided to turn the movie into what it is today, and it's popular amongst the Japanese and fans of the series.

Honda's direction of Godzilla stems from the fact that it was based on his haunted experience of the atomic bombings. After Godzilla, the majority of his Kaiju films tend to have a bittersweet ending, while others do have happier, less depressing endings.

Aside from Kaiju, Honda made other films in a variety of genres, which tend to be overlooked. He was long-time friends with Akira Kurosawa, and they directed movies together, such as Kagemusha, Ran, and quite a few more. Like Kurosawa, Honda's well-known actors in his films include Takashi Shimura (best known as Dr. Yamane in Godzilla), Akihiko Hirata, Kenji Sahara, and Akira Takarada.

If a film has something to do with radiation, or looks like a mutation of radiation, yeah, you'll know where this is going. Since Honda will pull this in his films.

Sadly, he passed away before he could direct Godzilla vs. Mechagodzilla II, which would have been his first Heisei Godzilla film.

Ishirō Honda has worked on the following movies/television shows: