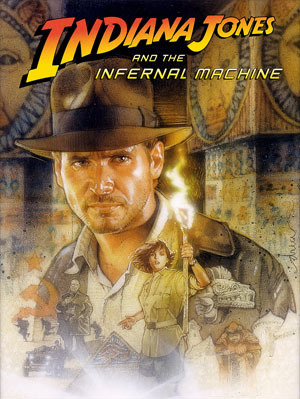 Indiana Jones and the Infernal Machine is a 3D action-platformer game based on the Indiana Jones film series, developed for the PC by LucasArts and published in November 1999. Ports were subsequently developed by Factor 5 and HotGen for the Nintendo 64 and Game Boy Color respectively.

Indiana Jones is hard at work in Utah, doing some archaeology (and not finding a lot) when old flame Sophia Hapgood drops in on him to elicit his help investigating a strange machine part and Russian activity in Babylon. Soon Indy finds himself travelling to the four corners of the earth in search of more machine parts, before the Russians do something everybody's going to regret.

Indiana Jones and the Infernal Machine provides examples of: