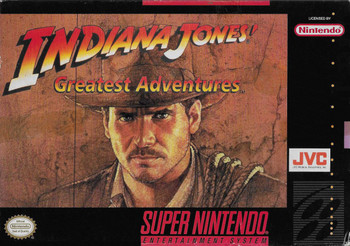 Indiana Jones' Greatest Adventures is an action-platformer game based on the Indiana Jones film series, developed for the SNES by Factor 5 and published in October 1994 by JVC.
Advertisement:

The game follows the original Indiana Jones trilogy fairly faithfully, consisting of 12 levels based on Raiders of the Lost Ark, 8 levels based on Temple of Doom, and 8 levels based on The Last Crusade. As Indiana Jones, players must go through each level, avoiding traps and fighting enemies, and occasionally fighting a boss at the end. To break up the platforming, there are also MODE-7 levels that find Indy in control of a vehicle, such as the raft and mine cart in Temple of Doom and the bi-plane in The Last Crusade. While Indy starts each level with only his fists to fight with, you can break open containers to acquire his whip, a revolver, and screen-clearing grenades.