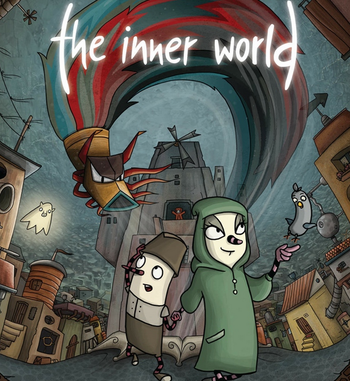 The Inner World is an independent 2-D Point-and-Click Adventure Game created by Studio Fizbin in Germany and published by Headup Games. The first game was developed in 2013 for PC, and was ported to iOS later that year. It was eventually ported to Playstation 4 and Xbox One in 2017, and then to Nintendo Switch in 2018.
Advertisement:

It follows the story of Robert, a member of a race called the Asposians, who live within a Hollow World known -likewise - as Asposia. Living with a callous Wind Monk named Conroy, Robert possesses a flute-like nose unlike any other that Conroy loves to hear play, and is the reason he hides Robert from the world within his fort-like home. Until, that is, Robert accidentally falls down the garbage shoot, and comes out in the slums of Asposia. while trying to get a trinket back from a pigeon named Peck, Robert runs into his owner, Laura, a rebel against Conroy, and his shady dealings involving the wind gods, the Basilians. From there Robert embarks on an adventure to figure out where he's from and find the truth behind his increasingly menacing guardian.

The sequel, The Inner World - Last Wind Monk, was released in October 2017 for PC, PS4 and Xbox One, with a Switch version following a year later. It is set 3 years after the last game, Robert has been stuck as a statue thanks to the remnants of the now dead Conroy's world conquering scheme, but in his absence his real royal family, who all are flute noses are being subjected to a witch hunt by the Conroyalists, led by nasty man named Emil, who believe Conroy was a hero who died fighting the flute noses as a hero. Since Robert believes himself unfit to be the new king, and has now revitalized issues involving Conroy's voice hounding his mind, he sets out to find a rumored Last Wind Monk to lead, since the previous three are indisposed of for various reasons. Unlike the previous game, Peck and Laura are also playable throughout the adventure to help Robert solve puzzles and progress.