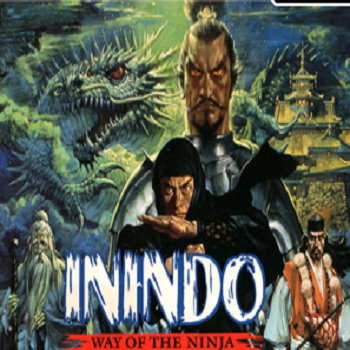 Inindo: Way of the Ninja (Inindō: Datō Nobunaga) is a 1991 Koei Eastern RPG with Turn-Based Strategy elements, following the travels of a young Iga Ninja.
Advertisement:

The game begins in June 1582, when the forces of Oda Nobunaga burn the protagonist's village to the ground, but withdraw before taking his life upon hearing urgent news of an incident at Honnō-ji Temple. Rather than dying at the temple as he did in real life, Nobunaga is merely injured, and somehow comes into possession of mystical demonic powers, and so the main character must go and complete his ninja training and gain the skills to avenge his clan and kill the unstoppable warlord.