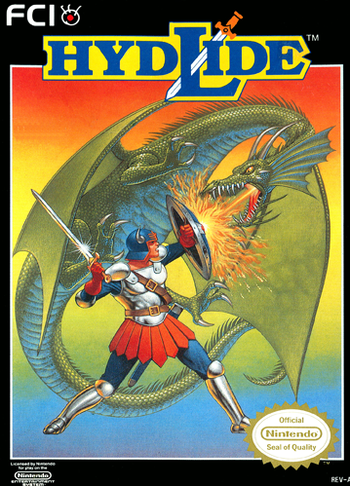 In 1984, the game Hydlide came out on the Japanese microcomputers PC-6001 and PC-8801. Upon its release in Japan, it was hailed as a revolutionary title. It was one of the first ever games in the emerging Action RPG genre, was the Ur-Example of a fully-scaled Wide-Open Sandbox world, and even introduced the Regenerating Health mechanic. Even across the entire world, these were fairly revolutionary concepts and for 1984, the implementation wasn't bad at all (one could draw up a reasonable contrast between it and Ultima IV, for example); in Japan, it was quite simply the first commercially-available, Japanese-native game to do what it did, period. The game's success led to ports across multiple other Japanese computer systems, and eventually the Famicom console in 1986, selling 2 million copies in Japan. Its revolutionary game design had a big influence on later action RPG/adventure franchises such as The Legend of Zelda and Ys. However, Hydlide was not released in North America until 1989, when North American gamers played the 1986 Famicom version for the first time on the NES. It is this version that the majority of North American gamers know about.
Advertisement:

A princess is attacked by the demon Varalys, who breaks her into three fairies and scatters them through the land. One of her kingdom's bravest knights, Jim, sets out to retrieve the fairies and the crystals that will restore her to her original form and allow him to slay Varalys.

While the original microcomputer versions sold well in Japan, the NES port later gained notoriety in North America for being terribly outdated in comparison to later, more refined, superior action RPG titles like The Legend of Zelda and Ys... some of which beat the '89 release to Anglophone shores. Compared to those later games, the graphics in Hydlide looked "messy and hard to interpret" in comparison. Unaware of when Hydlide first came out, some North Americans even wrongly accused Hydlide of being "a badly designed ripoff" of either The Legend of Zelda or Ys, when in reality, it was actually the other way around: both The Legend of Zelda or Ys were heavily influenced by Hydlide in the first place. This makes Hydlide a classic example of the "Seinfeld" Is Unfunny trope, with later generations failing to realize just how revolutionary it was for its time.

The game received several sequels, including Hydlide II for the PC-8801 and MSX in 1985, Super Hydlide (Hydlide 3 in Japan) for the MSX and PC-8801 computers in 1987 and Sega Mega Drive/Sega Genesis console in 1989. It was also remade as Virtual Hydlide for the Sega Saturn in 1995. While Hydlide II and Super Hydlide, with innovations such as a Morality Meter and Day Night Cycle, were considered good games in Japan, they became very outdated by the time Super Hydlide released in North America in 1990.

For clarity purposes, the original (or the Famicom/NES version) will be just called Hydlide, Hydlide II as Hydlide II, and Super Hydlide as Super.