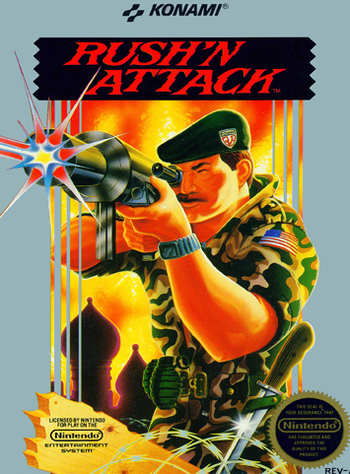 Rush'n Attack, also known as Green Beret in certain versions, is a side-scrolling action game by Konami originally released for the arcades in 1986 in which a U.S. Special Forces soldier must fight his way into a Siberian prison occupied by Soviet soldiers in order to rescue a group of American P.O.Ws that are about to be executed. The player is armed primarily with a combat knife for close range attack, but can acquire a variety of other weapons (a rocket launcher, a flamethrower, or grenades) from defeating certain enemy soldiers. Since the weapons acquired from enemies have limited ammo, one button is used for the standard knife attack, while the second button is used for special weapons. Since both action buttons are used for attacks, jumping is done the Kung Fu Master way, by pressing the joystick up, which is also used for climbing ladders.
Advertisement:

An NES version of Rush'n Attack in 1987 and like most NES games that were based on a popular arcade game, it is more of a remixed version than a straight port. In addition to having an entirely different plot (where the objective is now to destroy a top-secret weapon), it also features new stages, enemies, and music, as well as a 2-Players simultaneous mode similar to Contra (which was released for the arcades around the same time).

An arcade sequel was released in 1989 titled M.I.A., which changed the setting from Russia to Vietnam. Aside from the improved graphics and sounds, the play mechanics are pretty much identical to the original, except the player can now crawl on the floor and carry more than one special weapon, switching between them on the fly with a weapon select button. And like the NES version of the original, it can be played simultaneously with a second player as well.

A sequel was developed by Vatra Games, titled Rush'n Attack: Ex-Patriot, and was released in early 2011. General consensus of the game was that it was a poor imitation of Chair Entertainment's Shadow Complex.