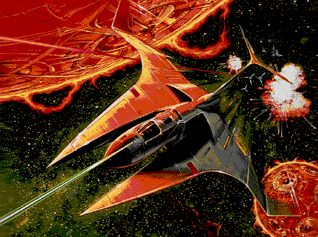 Destroy them all!
Advertisement:

Konami's Gradius (also called Nemesis in some incarnations) is one of the seminal side-scrolling Shoot 'em Up series. The player controls the Vic Viper, a small starfighter, and faces off against the forces of the Bacterions, and generally destroys everything.

The Power-Up scheme in Gradius was particularly innovative for the time — destroying waves of enemies (or special Palette Swap enemies) drops glowing tokens, which the player can exchange at any time for an upgrade. A bar at the bottom of the screen shows which upgrade they can purchase with the tokens they have collected, with the more powerful ones requiring more tokens. Essentially, the ship is carrying its own shop around with it at all times. This allows the player to tailor their strategy as they play — for example, they may elect to skip a cheap upgrade and hold out for enough tokens to buy a more powerful one.

This is in contrast to the system later used by R-Type, where there were multiple types of powerup each with a specific application.

Gradius's power-up scheme is a staple of the series, and later games provided different upgrade loadouts for different ships, or the ability to customize the loadout before playing. The traditional upgrade sequence is Speed Up, Missile, Double (a bidirectional cannon), Laser, Option, and Shield. It is because of Gradius that "Option" is often used to describe a powerup that provides the player with an Attack Drone.

The power-up scheme was copied by a few other games, such as Apidya and Project X.

The first Gradius was released in 1985, but in a real-life Retcon, the 1981 game Scramble was declared part of the series in Gradius Galaxies.note The first Gradius game was codenamed Scramble 2 before its final product release.

Compare Parodius, which is Konami taking this series and giving it a Cute 'em Up redesign. And pumped with enough LSD to drop an elephant. Also compare Otomedius, an anime parody series which has a lot of breasts and Fanservice.

The last Gradius video game released was Gradius ReBirth (ironically enough) in 2009. After that, Gradius just quietly went off the radar, outside of the aforementioned Otomedius. The series did get a pachislot spinoff in 2011, the series has cameoed in various other Konami games such as Pixel Puzzle Collection (a Picross-like game with puzzles depicting elements from and music lifted from various Konami games), the BEMANI series (mainly in the form of music remixes), and the second Zone of the Enders game (where it was depicted as a Transforming Mecha) and ports of the games get released from time to time (with the latest being Arcade Archives: Gradius III in 2020), but don't get your hopes up for a new Gradius game anytime soon.note Even ignoring Konami's extremely controversial business practices starting in 2015, Gradius lost its commercial traction after the 1990s, along with the rest of the shmup genre as three-dimensional games became the new norm. However, there may still be a sliver hope that aside on how Konami has calmed down a little on the controversies and at the 2020's have been releasing compilations of their old games that gained ground in the 8-bit era, which was basically their proven golden age (as shown with either Castlevania, Contra or their Teenage Mutant Ninja Turtles games), a Gradius compilation may be possible and your best bet for modern exposure, but even then, it wasn't Konami's top tier defining franchise even in that age, so the chance is still low.

Not to be confused with the 2003 console RPG Gladius.

Destroy them all! The Gradius series provides examples of: