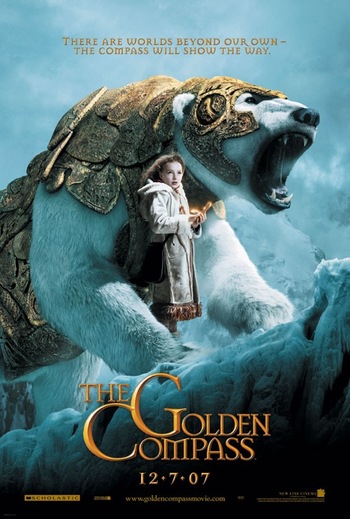 The 2007 film adaptation of Philip Pullman's His Dark Materials, or rather, a loose adaptation of the first book in the trilogy. It takes its name from the book's US title instead of Northern Lights.

Lyra Belacqua, an orphan running amok at Jordan College, gets drawn into her Uncle Asriel's stories of the North. Snatched up by Mrs. Coulter with promises of adventure, Lyra gets involved in an adventure that leads her to befriend Armored Polar Bear Warrior and a Hot Witch as she searches for her lost friend in the North.

The film didn't do too well on release, not helped by the Executive Meddling, the ongoing recession at the time, and the film's downplaying of the books perceived anti-religious themes, making it quite a famous example of a Stillborn Franchise.

An unrelated TV series His Dark Materials that adapts the same books was announced in 2015 by The BBC, and started airing in November 2019, and became a BBC/HBO co-production. It set itself out to be Truer to the Text than the 2007 film, and is on its way to adapt the whole book trilogy.