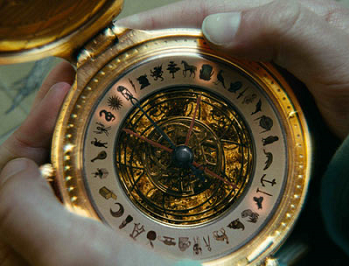 Will: How can we sail to an island nobody can find with a compass that doesn't work?
Mr. Gibbs: Aye, the compass doesn't point North. But we're not trying to find North, are we?
— Pirates of the Caribbean: The Curse of the Black Pearl
Advertisement:

A compass is used to point to magnetic north, which allows travelers to get their bearings and find their way. The Magic Compass works on different principles to point to something else. Whether it only points to one specific place or object, or to different things at different times, its use is to lead whoever holds it to something that is lost or hidden.

To be a magic compass, it must indicate a direction. It cannot be something that leaves a trail nor is it a map. Its method of operation should be something inexplicable and/or incomprehensible, quite often artifacts of a wizard or a Sufficiently Advanced Alien.

Forms may take a traditional spindle compass or some object that indicates a specific direction by some means. May also be used alongside a Magic Map, probably by The Navigator.