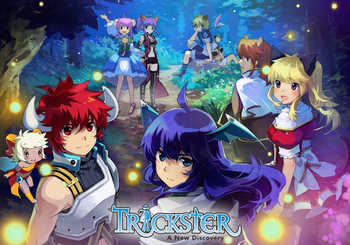 Next Sunday A.D. an old eccentric named Don Cavalier, who is the owner of Megalo Company, passes away. In his will, he declares that his vast fortune will be shared with everyone who decides to participate in his magnum opus, a Defictionalized MMORPG taking place on a desert island in the Pacific Ocean. However, there seems that there is something more to it than that.
Advertisement:

And so various adventurers make their way to the island, all with their own reasons for seeking a fortune. And that's where your place in this story begins.

Trickster Online was a PC MMO that launched in 2003 in native Korea, with Chinese and Japanese servers following in 2005 and a NA version launching in 2007. It shared a lot of similarities with Ragnarok Online, though the mechanics are fairly different and it has quests in place of monster grinding like most modern MMORPGs. Also ingrained in the game is a system that allows people to drill for things underground. And everyone starts off looking Little Bit Beastly due to entry requiring this.

As of 2/27/2013, Trickster's USA servers have been shut down. The Korean servers were shut down on January 18, 2014. On November 2014, a mobile game known as I Wish to Become a Summoner, with reused assets from Trickster Online, was announced.

Examples of Tropes used in this game: