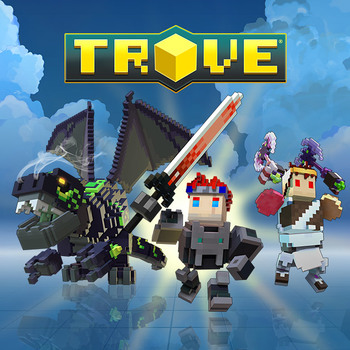 From left to right; A Dracolyte in Dragon form, a Knight and a Candy Barbarin.
Advertisement:

Trove is a free-to-play voxel-based action MMORPG developed by Trion Worlds. It was first released for PC on July 9th, 2015, and was then ported to Xbox One on December 13th, 2016 and to Playstation 4 on March 15th, 2017.

The game takes place long after a war between the Sun Goddess and the Moon Goddess. To protect her people, the Sun Goddess shattered the realms in a brilliant light. But now, evil has returned, and you have taken up arms to take back your would, one multicolored block at a time.

Similar to Minecraft and Cube World, Trove features procedurally-generated Wide-Open Sandbox worlds that can be broken down and explored. What makes Trove different is a focus on grinding up for better gear to become powerful enough to take on some of the highest challenges in the game, these the being Shadow Towers and Battle Arena.

Since its launch, the game has received multiple updates, such as new classes, events, and biomes, as well as new weapon styles, class-specific costumes, and mounts.