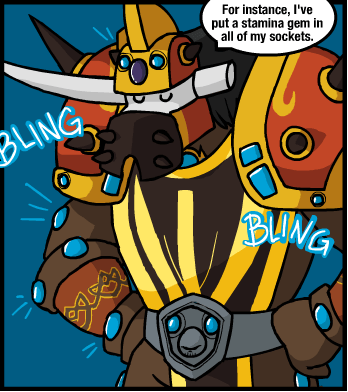 "There exist five varieties of magic powder, each corresponding to one of five different elements; Fire, Water, Thunder, Earth, and Air. It is possible to augment items with these powders, if one is versed in the art of enchantment. [...] Certain items have a higher magical capacity, and thusly are able to hold more powders within them. Some have many, some have few, others still have none."
— Excerpt from Chapter 1 of the Powder Manual, Wynncraft
Advertisement:

A piece of Socketed Equipment comes with a number of empty "sockets," into which can be placed various "gems" (ie. Green Rocks) to add more qualities to said piece of equipment: a ruby might add Fire damage or resistance to fire, a black diamond might add Life Drain, and so on.

In the original concept of the trope as presented by Diablo, once a gem was in a socket, the match was permanent and that was the end of the story. When combined with Randomly Generated Loot (which Diablo also featured), this meant that every piece of EQ you encountered was completely unique, even before you socketed it out. It also meant you lived in fear of socketing a gem and then, on the very next dungeon crawl, uncovering an even better piece of gear that you would've rather saved the gem for.

In technical terms, this trope is a modular customization scheme in which you can create gear with any combination of pre-determined qualities you desire. In general, it's only seen in games with Randomly Generated Loot, since this ups the possible combinations immensely; it also means you can't control an item's sockets, style (IE sword vs spear vs etc) or pre-existing enchantments, and instead have to spend a lot of time adventuring (or Save Scumming) in the hopes of finding that perfect piece of gear. This is a very effective time sink.

Supertrope of Gun Accessories, which is basically this but with less abstract stat boosts. Contrast Item Crafting, which this is the aftermarket equivalent of.